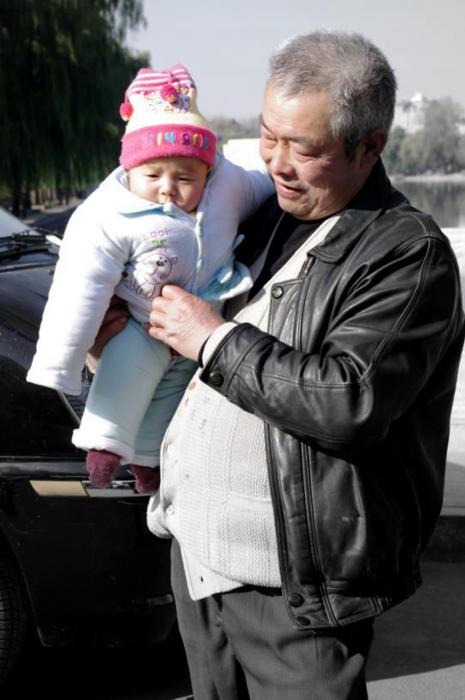 I’d never seen such extended fishing-poles before, but these seem to be the norm for Xihai-ers… then again I’m also completely fishing-illiterate.

A Xihai-er sunbathing while keeping some vegetables company

Beijing babies are dressed up to the nines when out and about in winter, and this one was no exception

A smallish yard behind the Alliance française classroom building. Still not sure why I always find air-conditioning units arranged in certain ways so visually arresting… Anyways, the smokers in our class loved to gather here for a chitchat.

The yard was also the perfect place for me to try ( = wobble around on) a retro bicycle one of my classmates had just bought, a wide-frame cream-coloured beauty that was unwieldy and difficult to ride. Wobbly and all, it was lots of fun — though I’m fairly sure my classmate had a slight anxiety attack about the future of her beautiful bike while I was on it…

My classmates and I would have lunch most often at this tiny shop, or puzi (铺子), which sells steamed buns (baozi 包子), dumplings, all kinds of noodles, and other yummy simple fare for very cheap (a generous plate of noodles, for example, costs 6 or 7 RMB, which is roughly 1 USD). Four friends would group together, each order something, thus there’d be four dishes to share: probably a soup, a baozi dish, a dumpling dish and a noodle dish; and we’d end up each paying only 6 RMB or so after eating an empress’s/emperor’s fill! I love strategic group food-ordering, which is a big part of Chinese culinary culture. : )

I would’ve liked to get a shot of the owner too, but he was too shy.

One of my favourite things about this little eatery was that the owner had his daughter’s drawings up on the walls as décor:

For me there’s something about the very sight of longzi 笼子 (those round stackable containers used to steam buns/dumplings etc) that is really heartwarming and comforting.

I have lots more great memories than I do pictures of the several winter months I frequented Xihai… Come to think of it, I haven’t been back there since January, when my course ended. Quel dommage! I should make a trip back soon.