Upon the recommendation of an artist friend who spent six months living in Istanbul last year expressly to paint oil paintings —who would ignore a travel recommendation from someone like that, right?— I set off to have an afternoon stroll around Fener and Balat, traditionally Greek and Jewish (respectively) neighbourhoods of Istanbul. It was a quick bus ride, via the 55T, from Taksim.

An area that has seen better days, Balat’s streets are lined with brightly coloured, often dilapidated (if not outright hazardous) houses. In contrast to the many abandoned and decaying buildings, there’s a strong sense of vibrancy and general ‘neighbourhoodliness’, with its many shops selling household and everyday foods and goods, and countless children running about playing in its streets. 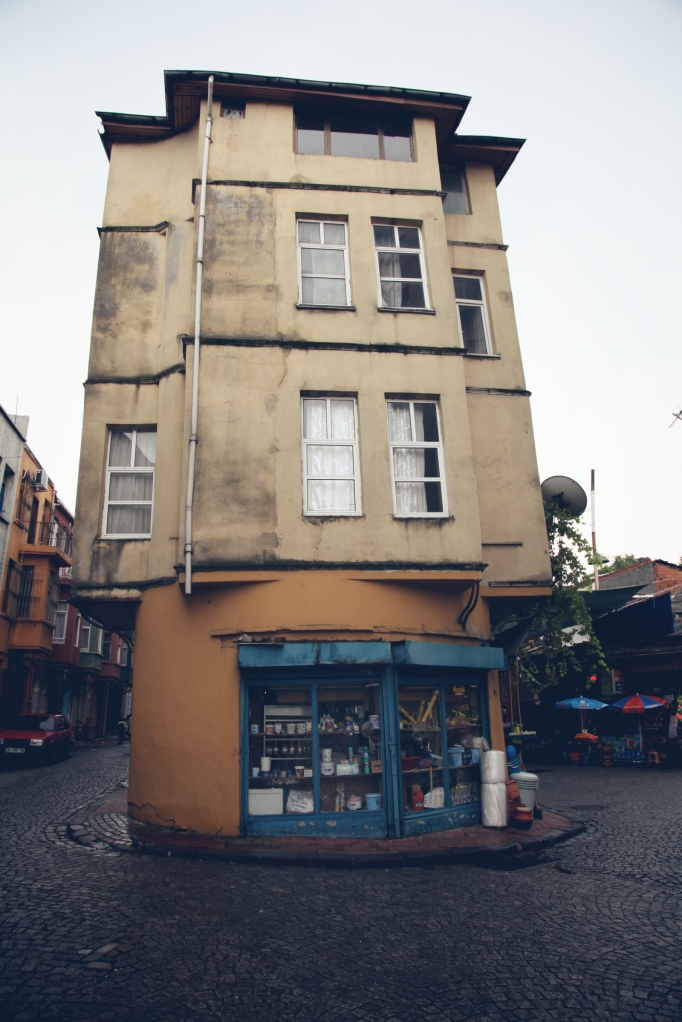 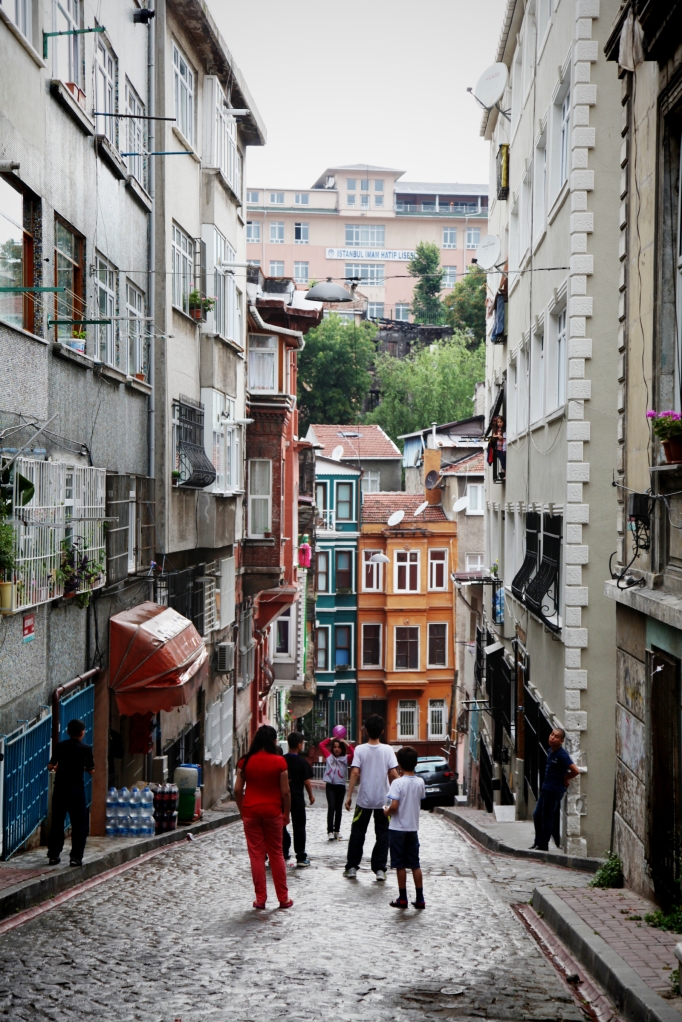 Most of the homes in this area resourcefully use large yoghurt tubs as flowerpots: 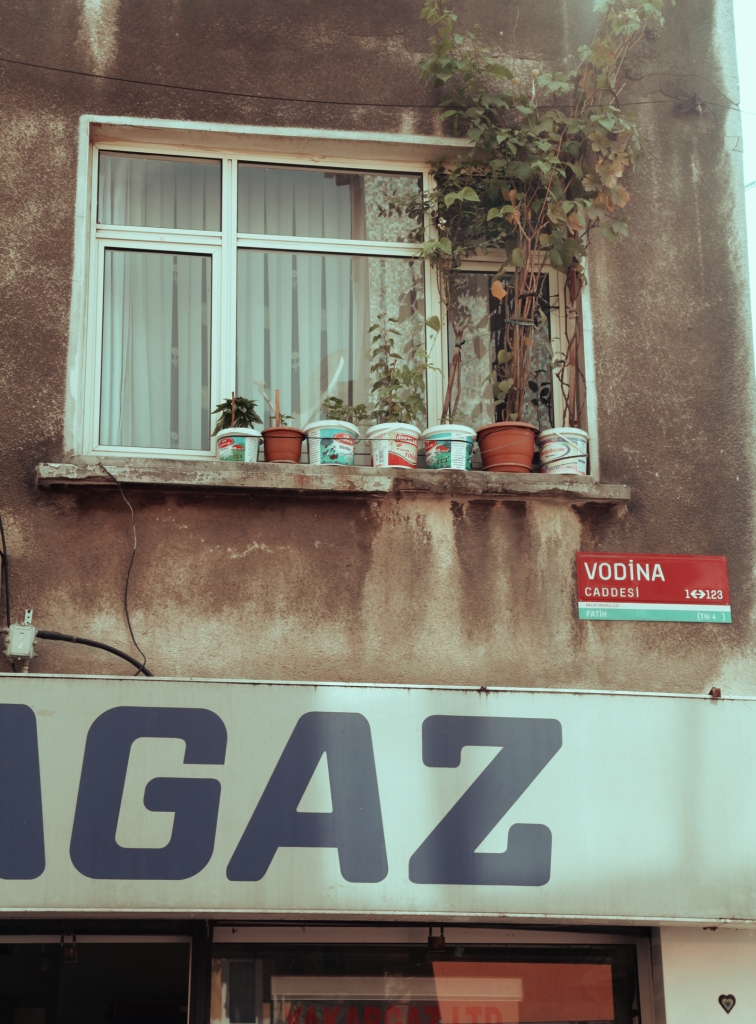 I’m not sure what was being sold here, but the method of transfer was fantastic… If you live on an upper floor, sending a basket down to the street-seller with the money, who then promptly sends it back up with fresh produce, is so much easier than trekking up and down all those flights of stairs : ) :

Many of the houses in the area are mere shells of their previous habitable selves. One often comes across signboards announcing hopeless-looking structures for sale, or that the authorities have taken over as part of the larger Fener-Balat ‘güzelleştirme’ or ‘beautification’/urban renewal project. 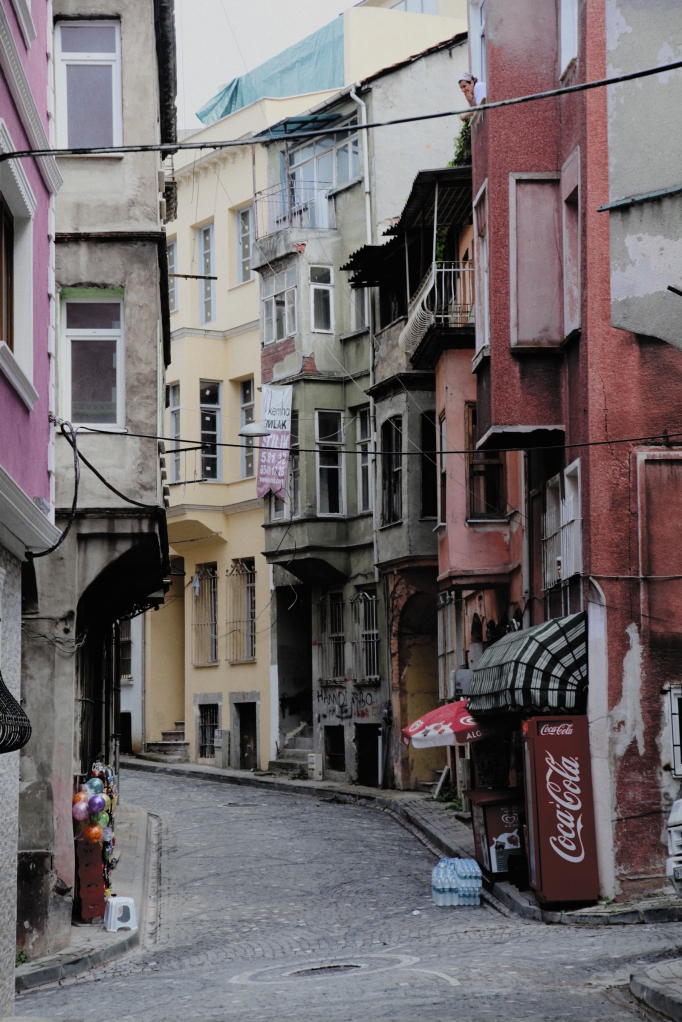 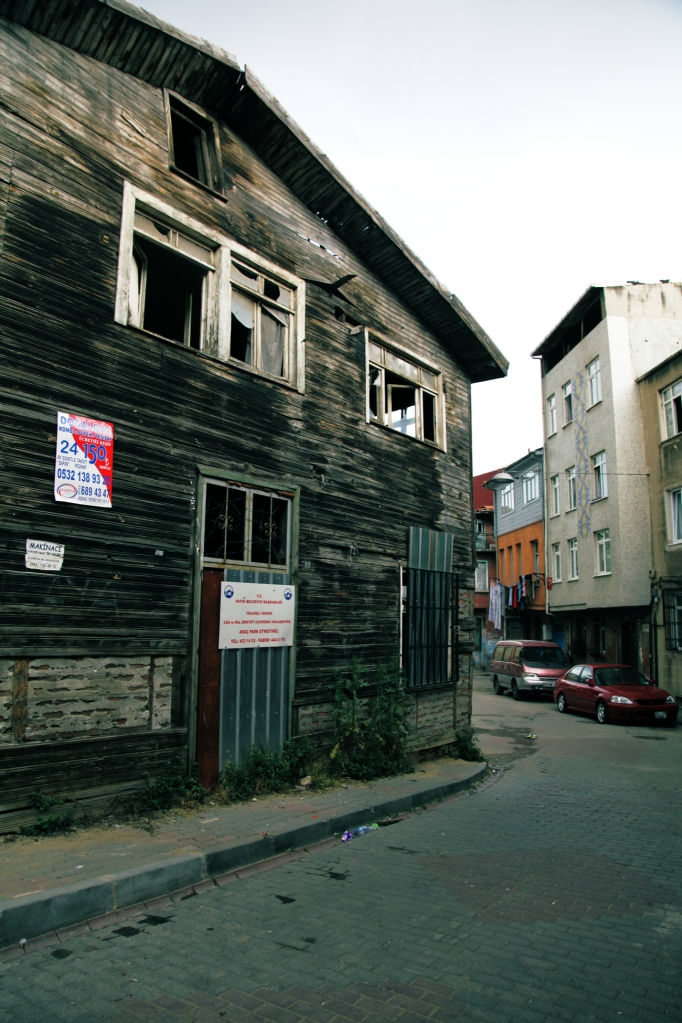 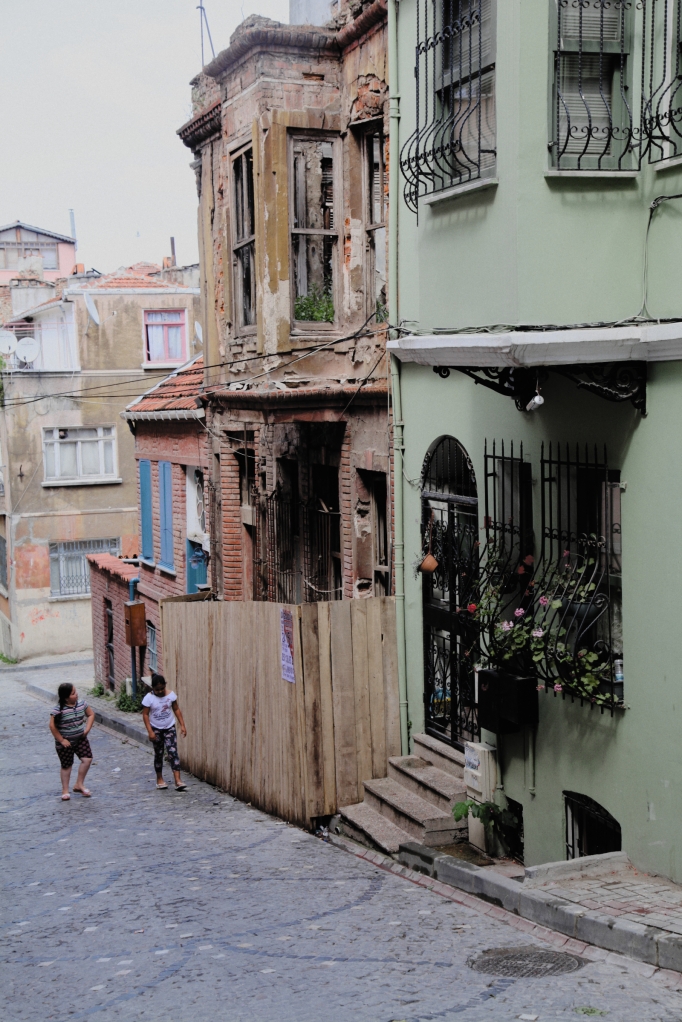 As later became clear, I had initially found myself in a relatively poorer section of Balat, where some of the children were very vocal in approaching and asking for money. One requested that I take a photograph of him, then promptly asked that I buy something for him from a nearby shop in return. Once I had left that particular block of three or four streets, however, the dynamic changed drastically; the locals and children largely went about their business, and I went about mine, with only the occasional friendly smile or simple daily greeting exchanged. These children in particular were exuberantly friendly and sweet (and pleased as punch when I got their names straight):

This fellow insisted on this glorious pose: 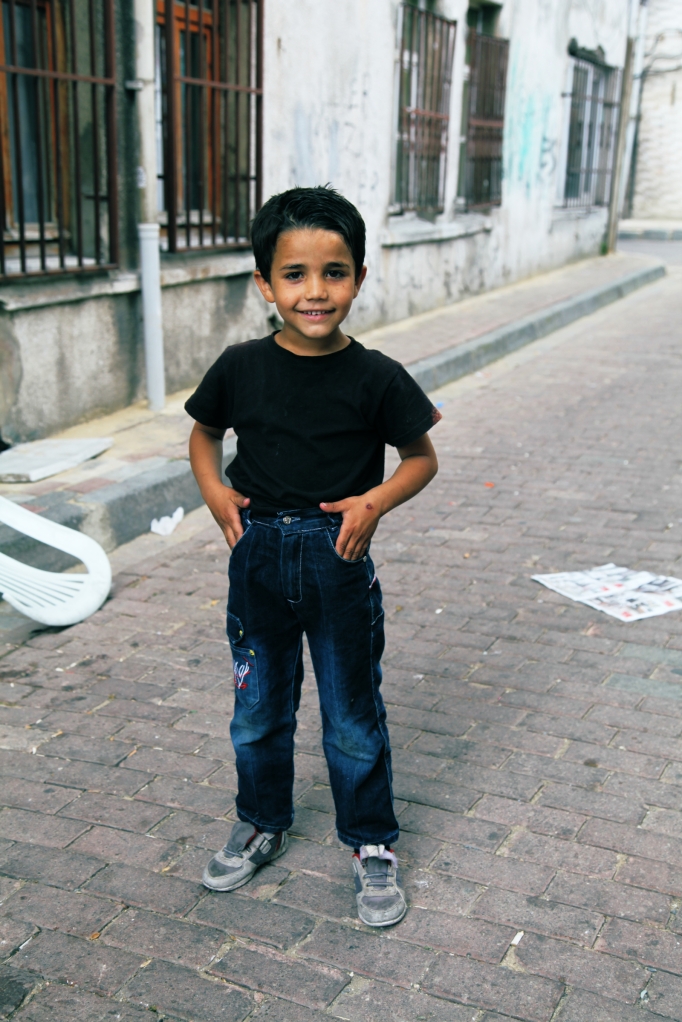 One doesn’t need to stretch the imagination far to imagine how bustling and beautiful the now dilapidated areas of Fener and Balat must have been in its heyday, with its rows upon rows of picturesquely painted and tilted houses. Parts, however, remain splendid to this day. As I ambled slowly up the sloping paths (Istanbul almost never lets you forget it’s a hilly city!) and rounded a bend, glimpses of this stunner shocked me to a standstill: 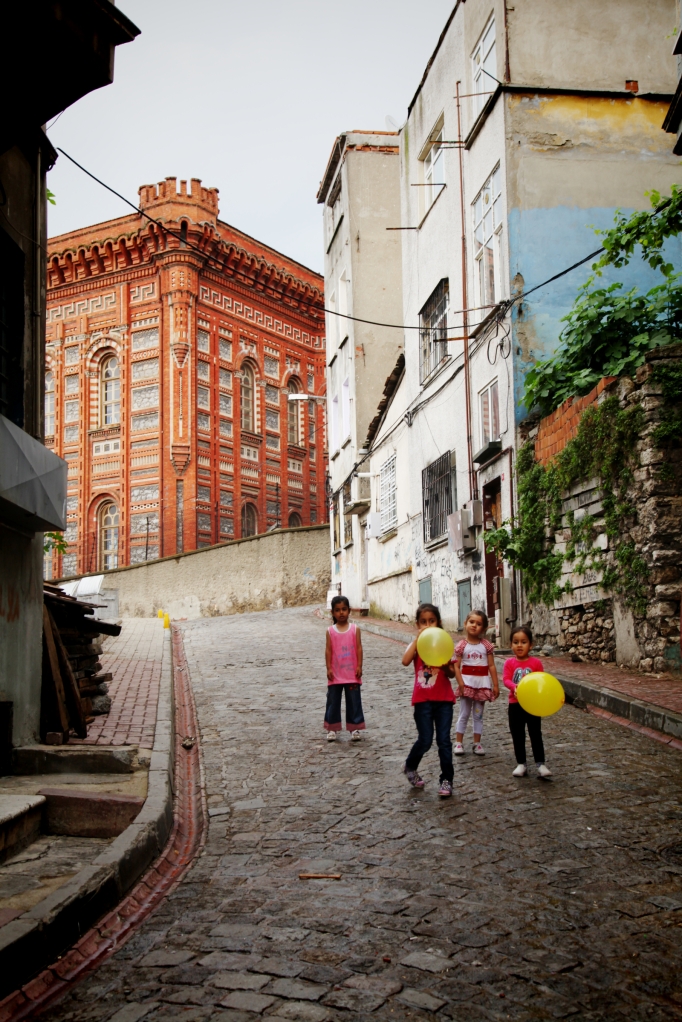 What a beauty. The Özel Fener Rum Lisesi, or Phanar Greek Orthodox College, still in use as a school today, was completed in 1883 during the Ottoman Empire — a monument to Istanbul’s more cosmopolitan past, architectural eclecticism, and its creators’ emphasis on education.

Of course, I had to wend my way around from the other side to experience the school from its front as well. By then the forebodingly cloudy skies had begun to fulfil their promise, so here’s a rather grey and rainspotty take on this magnificent structure: 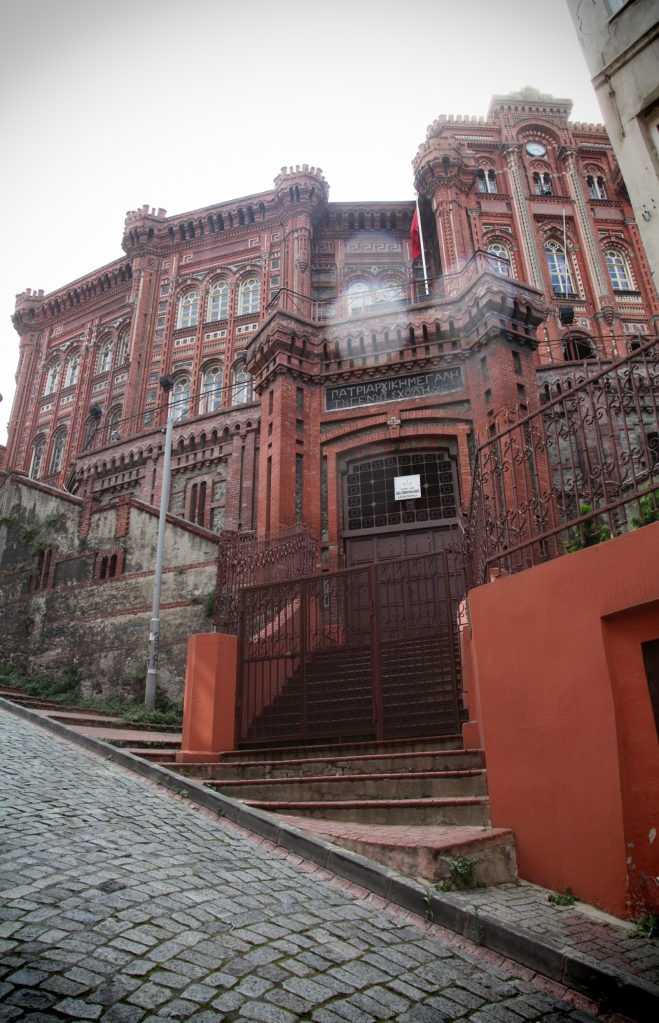 There are many angles from which one can re-discover the school, if one chooses different paths to head upwards. Another lovely path went something like this: 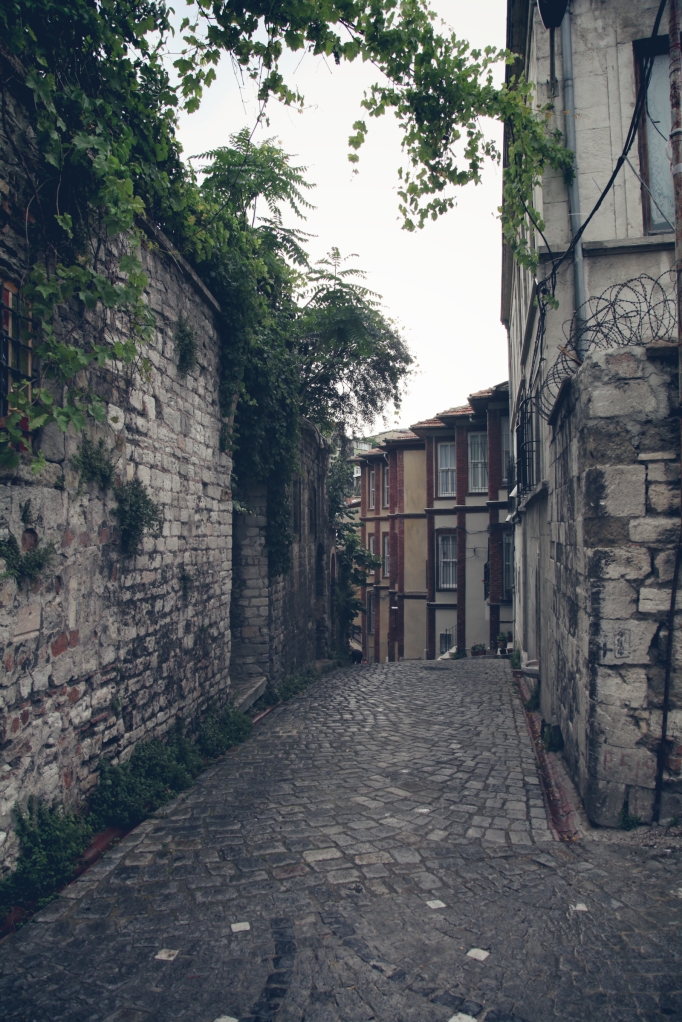 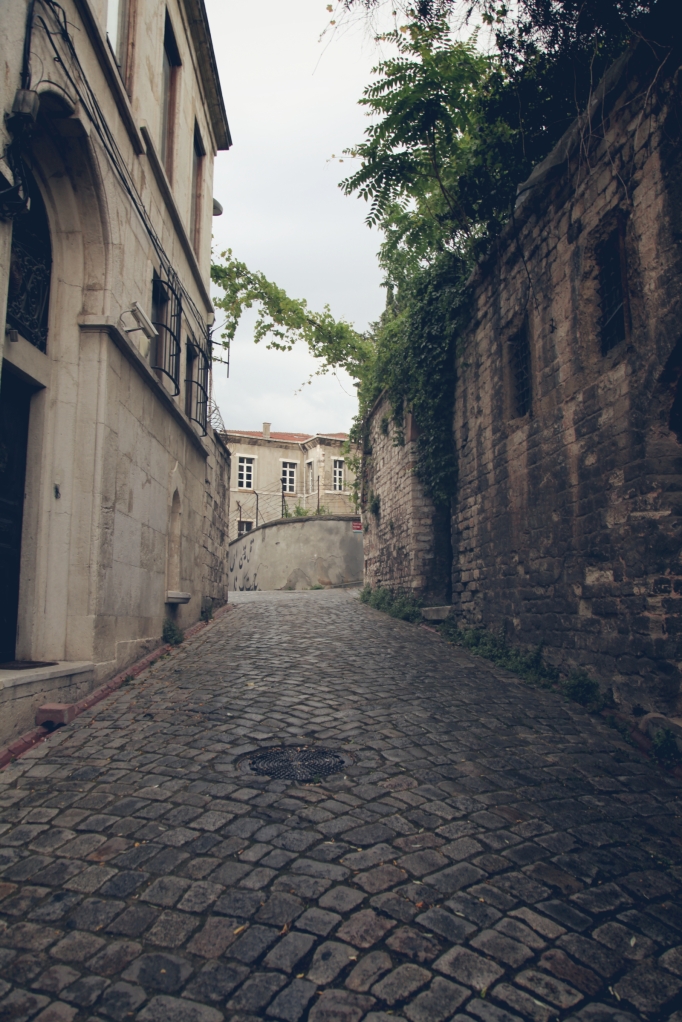 And then, round the corner: 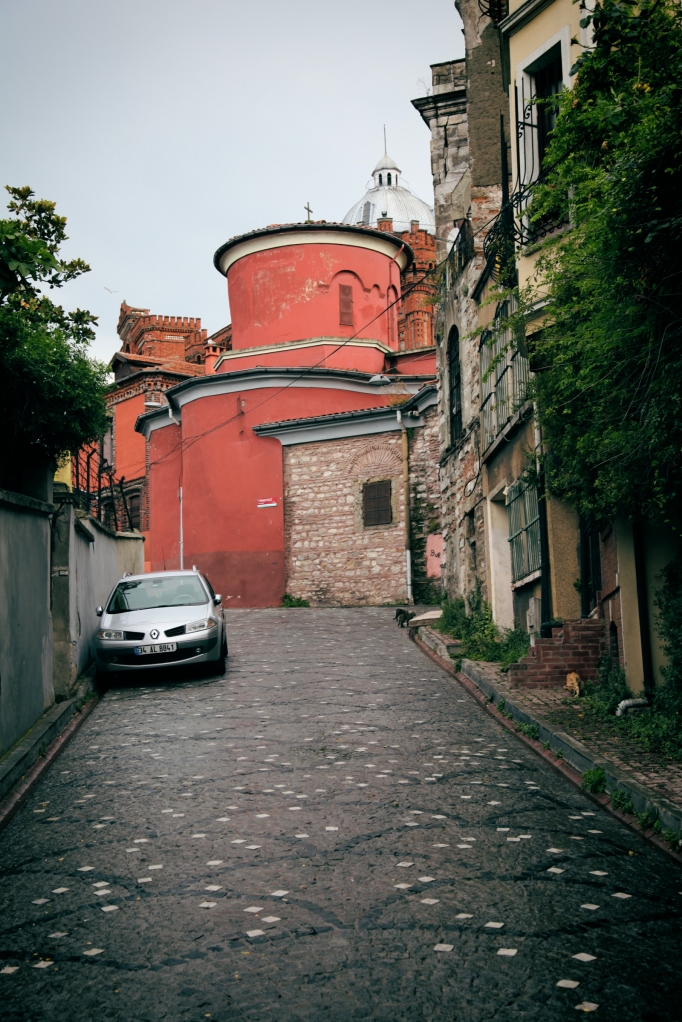 That round, rose-red building is the Church of St. Mary of the Mongols. As you might have surmised from its name, it’s a church with quite the story behind it — and apparently it’s also the only Byzantine church in Constantinople/Istanbul that’s never been converted to a mosque, no less! The things one bumps into strolling around this city…

To me this is one of the most quietly spectacular things about Istanbul, deservingly known as the ‘City of Seven Hills’ — there are often so many different angles and views one can have of the same structure or the same street, depending on which path one takes to get there.

I later happened to get caught in pouring rain during my stroll (completely my fault, since I studiously ignored all signs of imminent heavy waterfall due to enjoying my walk so much). Once the downpour started, I ducked under a modest eave of the nearest building and was content to stand there for as long as needed, until I was beckoned insistently over by the owner of a kahve opposite. I was surprised, as generally kahves in Turkey are gathering places for men only, and from the same neighbourhood, to socialise, usually playing cards and other games while drinking tea or coffee. So I was an intruding ‘outsider’ on more than one count. Yet it was very pleasant to sit there quietly watching the rain in their company as they went on with their games, newspapers, and coffee; and I was served my own newly brewed cup of tea as well without so much as a word from the owner, who promptly disappeared into the back of the establishment somewhere. Such a kind and spontaneous yet typical instance of Turkish hospitality.

As with most places, the area took on a very different atmosphere under blue skies and bright sun: 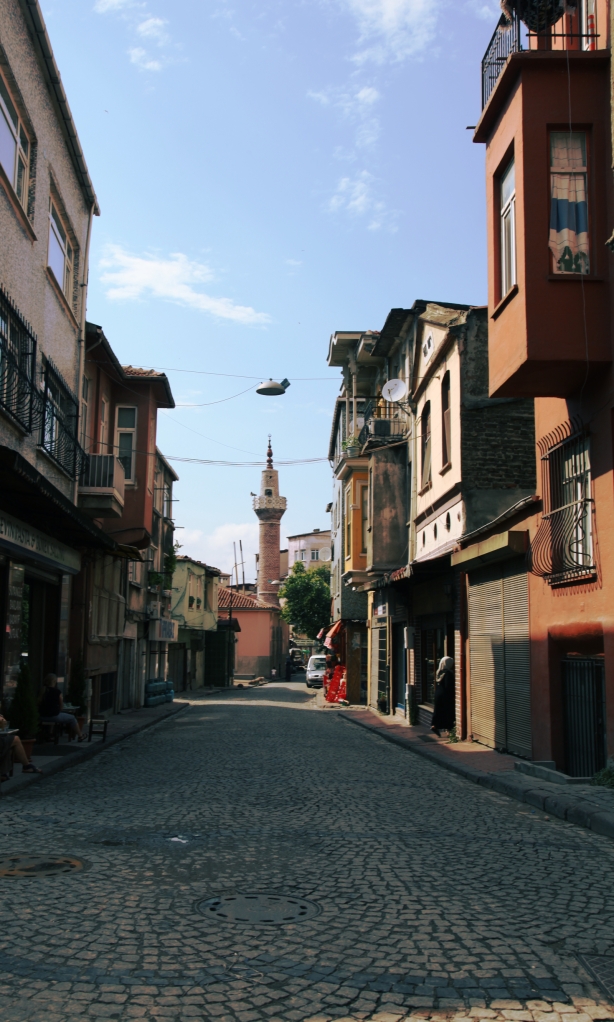 In and around one specific street, Vodina Caddesi, the beginning signs of gentrification are most obvious:

I went to have a look at the official Fener-Balat project website, entitled ‘Rehabilitation of Fener and Balat Districts Programme,’ actually a joint project between the Fatih Municipality and the European Commission. I was surprised, though, to read that “the Programme will be completed by the end of 2007” — that was a whopping seven years ago! I’m not sure what to make of that — clearly the neighbourhood in its current state doesn’t send that sort of message. I tried ‘www.fenerbalatimiz.com‘ as well, an address given on some of the signboards, but that led to an Internet dead-end as well (site not working as of this post). I wonder what’s going on now, what people are heading the project (if it still exists in an organised fashion), and what the future of this historic and charismatic neighbourhood, with its many tucked-away treasures, will be.

A cursory stroll wasn’t nearly enough, and I’ll definitely be back to get to know Fener and Balat better!