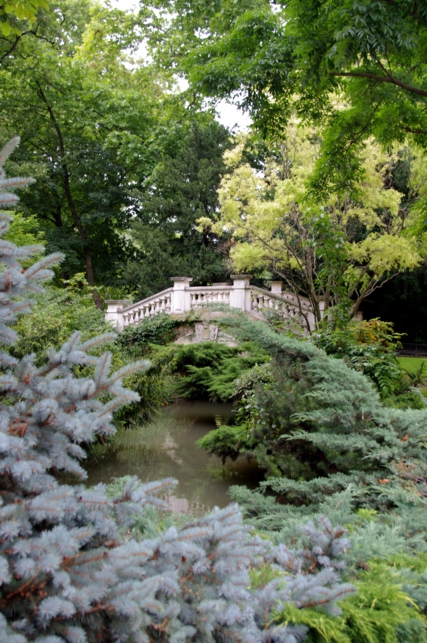 Even the McDonald’s restaurants in Paris have macarons on offer:

Summer rain comes and goes without much ado in Paris 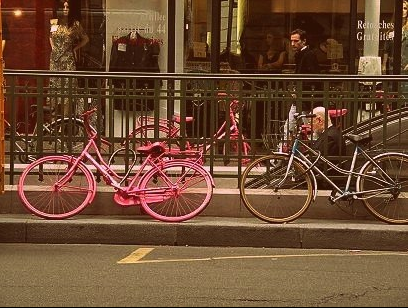 What looks like a side door to the Institut d’Études Politiques:

At the flea market

Alarmingly cool glasses at a café

The following pictures of tombstones were all taken at the cemetery of Père-Lachaise — which is a fascinating place to visit, and very lovely in its own way. (For future visitors, I recommend starting at the cemetery’s rear entrance instead of the front one; you walk downhill instead of up, and you also start at the most atmospherically peaceful and tranquil part of the cemetery.) The shapes of the many graves and countless flowers, tributes and trees make it a beautiful place for a thoughtful walk; and not least, there are an amazing number of celebrated people who have been laid to rest there.

I’d read about Oscar Wilde’s idiosyncratic lipsticked tomb, but it was something else seeing it in ‘person’.

Balzac’s was undergoing some sort of restoration

And Proust’s! So un-ostentatious, I nearly missed it completely. It felt strangely appropriate to see his name there, since many of us who walk through cemeteries are in search of lost time, or walking in remembrance of things past.

And my biggest surprise, Modigliani! An astoundingly simple grave, too. Someone had had the sweet thought of leaving him a pen, and the gesture had caught on; my mother happened to have one on her so we left it there. It’s bright pink with little gold leaves all over it… so if you visit Modigliani as well sometime, perhaps you’ll see it. : )

The city of paris has surprisingly cute ‘no graffiti’ signs:

Almost everywhere you look in the older sections of the city, there are pretty doors to be found (see: mother and sister staring admiringly at one).

This is how much Chinese tourists shopping in Paris have become the norm, apparently… (the Chinese reads “duty-free shopping / Chinese interpreter available”)

YUM! My little sister loves these… and who can blame her? This one became our staple, Nutella-banana… :D

Lots of people having fun around and about the venerable Louvre

This guy in particular was quite a stand-out!

Shop window reflections, I’ve come to realise, act somewhat like automatic multiple exposures… now they don’t get on my nerves nearly as much

We also ambled through Parc Monceau, which is modestly sized but has an interesting history and spots which are quite beautiful.

…And onto Sacre-Coeur, where a busker was playing the Beatles, ‘All you need is love’, ‘Let it be’, etc…. He really got the crowd going. It was nice, I stood at the bottom of the steps of the Sacre-Coeur and listened to them sing, many of them shyly, but the wind carried their voices.

Walked back down to Montmartre…

…stopped by and got some macarons at Fauchon

I’d always disliked the macarons I’d tasted before, finding them much too sickly-sweet, but these were DELICIOUS. Even the names of their flavours sounded good enough to eat: salted caramel, jasmine tea and vanilla, violet and licorice, rose…

On that yummy note, à bientôt !

iThere are no comments